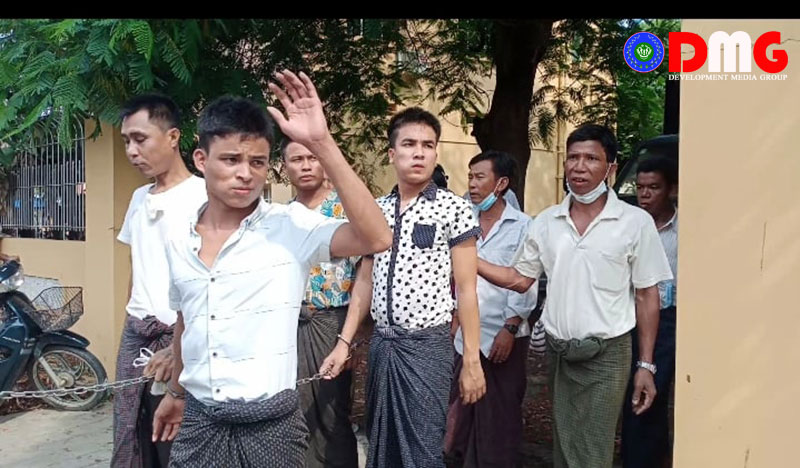 A total of 13 people were charged in Arakan State last month under Counter-Terrorism Law provisions, for which some could face up to life in prison if found guilty, according to the Assistance Association for Political Prisoners.

According to figures based on media reports and other sources, another 65 were arrested in May but not ultimately charged, AAPP said on June 5.

Those facing terrorism charges are from Maungdaw, Taungup and Rathedaung townships, while detainees were from Rathedaung, Ponnagyun, Mrauk-U, Kyaukphyu, Ann and Taungup townships.

“In Arakan State, 78 people were arrested and 13 of them are now charged under the Counter-Terrorism Law,” said U Aung Myo Kyaw, manager of the AAPP’s Yangon office.

Critics point out that the number of cases brought against civilians under the anti-terror legislation has increased notably since the government declared the Arakan Army as an unlawful association and “terrorist group” on March 23.

According to a presentation to the state parliament from U Kyaw Hla Tun, the advocate general of Arakan State, there were 109 cases charged under the Counter-Terrorism Law in Arakan State between February 1, 2019, and March 20, 2020, before the March 23 declaration was issued.

Pyithu Hluttaw lawmaker U Pe Than said civilians who have been arrested on suspicion should be first credibly determined to have suspect ties to a terrorist group before being charged under the Counter-Terrorism Law.

“Now, suspected people have been facing terrorism charges once they were arrested. They suffer a big loss when they are released from charges after a court trial,” he said.

“If they really are affiliated with a terrorist group, charging under the Counter-Terrorism Law is not a problem. However, for those who have been charged without having ties with any terrorist group, it is a big suffering.”