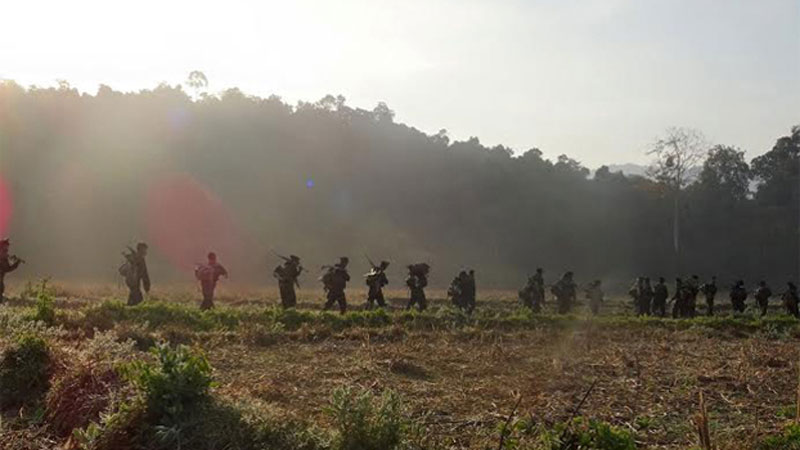 Hostilities between the Tatmadaw and the Arakan Army (AA) have reportedly intensified in Rathedaung and Minbya townships amid persistent concern among local residents about an ongoing outbreak of COVID-19 in Arakan State.

Fighting between the Tatmadaw and the AA erupted in Rathedaung Township’s Kyauktan village-tract on the morning of October 3, with the military reportedly using two jet fighters in the clashes, locals said.

The Tatmadaw used a fighter jet again and a military battalion based in downtown Rathedaung fired artillery shells on October 4, according to residents.

“I heard heavy weapons firing all night long,” said U Maung Thar Tun, a resident of Aungtharzi village in Rathedaung Township. “The artillery shelling stopped in the early hours of the morning. I don’t know exactly whether the fighting continues or not. About 30 homes were damaged by the artillery shells.”

Clashes broke out between the Tatmadaw and the AA at a location between Minbya Township’s Maylwan and Pharpyaw villages on September 30, and on Sanwin Hill near Rarmaung Bridge on October 1, according to residents.

A 53-year-old woman from Thaykan village is receiving medical treatment at Minbya Hospital after being injured by shrapnel.

Fierce fighting was reported between the Tatmadaw and the AA in Kanni village, near the No. 9 military training school in Minbya Township, on October 2-3, with the military launching offensive operations involving aerial support in the form of attack helicopters, locals said.

“Locals are staying at home in anxiety because the military’s helicopters bombed the area. Military troops from Minbya arrested a person with mental disability, handcuffed and beat him,” said a local who declined to be named for security reasons. “Local people are living in fear. When the fighting broke out, the soldiers arrested anyone on sight.”

In contrast to the recent escalations, the Tatmadaw announced on September 29 that it would extend its unilateral ceasefire through October 31, saying the extension was intended “to increase momentum of effective and rapid containment, prevention and treatment of COVID-19 in Myanmar and restoring lasting peace.”

The Tatmadaw said its ceasefire would apply “except in the areas where terrorist groups declared by the government take positions.” That caveat is widely interpreted as thus excluding large parts of Arakan State and Chin State’s Paletwa Township, where the AA is operational.

Meanwhile, on September 1 a trio of ethnic armed groups including the AA issued a 70-day extension of its own previously declared unilateral ceasefire, citing COVID-19 and the hope that the peace gesture would ease conditions for holding Myanmar’s general election on November 8.

Local residents have repeatedly urged the warring parties to lower their guns and negotiate a lasting settlement amid the ongoing pandemic.

“We want peace without any fighting amid the pandemic,” said U Maung Thar Tun, the Aungtharzi village resident. “The people will not be able to exercise patience if both sides are shooting at each other. In cases of fighting, the locals have to flee. We are worried that many people are taking shelter at IDP [internally displaced people] camps amid the virus outbreak. Being a local, I would like to urge both sides to immediately stop the fighting.”

The number of IDPs in Arakan State has climbed to over 226,000 due to clashes between the military and the Arakan Army over the past two years, the Rakhine Ethnics Congress (REC) said in a statement on October 1.