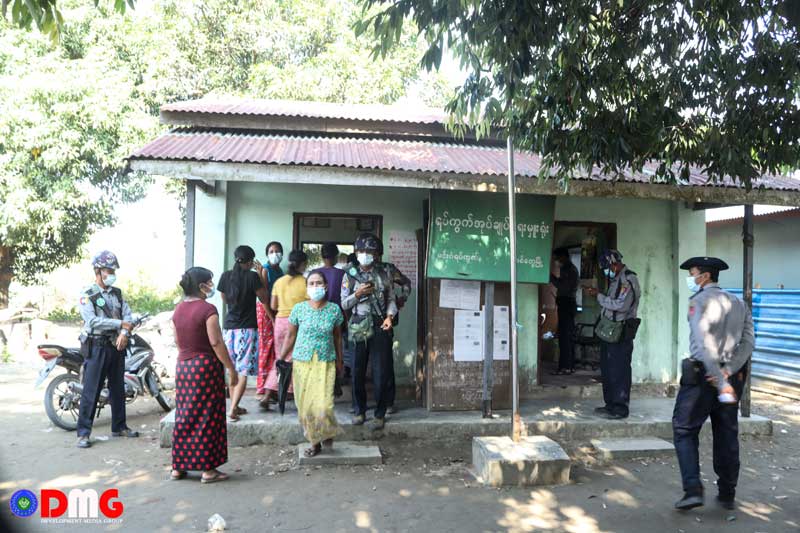 Disputes over government subsidies during the coronavirus pandemic have reportedly erupted between ward and village administrators and the public in some Arakan State townships.

The government has pledged to provide K40,000 per household to the “grassroots” (low- or irregular-income households) across the country, but in some parts of Arakan State, the cash assistance has been only a fraction of what was promised, or altogether nonexistent.

On November 20, more than 50 women living in Sittwe’s Mingan ward went to the ward administrator’s office to demand the administrator’s removal over what they said was a failure to disburse the pandemic monetary aid.

“We have never received the grant. We went to the ward administrator’s office to ask for the cash but we were refused. We came to protest because we were not satisfied with that,” said Daw Phru Phru Thein from Block 8 in Mingan ward. “There are many people who have not received the grant. Only those who have close relations with the ward administrator were given the cash.”

There has also been criticism that some ward administrators are only providing financial support to their relatives.

“Many people are facing financial hardship amid the ongoing pandemic. I want the ward and village administrators to distribute the government funding in a fair manner. I also want the government officials to solve these problems,” she added.

Disputes over the government’s coronavirus cash assistant have been reported in wards and villages in Arakan State’s Pauktaw, Ramree, Thandwe, Manaung and Ann townships, as well as the state capital Sittwe.

Some people complained that the government subsidy was not received by the grassroots in some wards in Pauktaw Township, and that only those close to the ward administrators were receiving it, said Daw Tin Tin Aye, the in-charge of the Rakhaing Women’s Union (RWU) in Pauktaw Township.

While the government pledged K40,000 per household, residents of Kalapon village in Ramree Township said they received only K7,000.

Controversy also erupted in Thandwe Township’s Padekaw village as only 60 households out of 86 received the government’s subsidies.

More than 700 people in Manaung Township had come to ask for help over a two-day period due to lack of government funding, said U Sein Thar Tun, a spokesperson for the township’s National league for Democracy chapter.

State Counsellor Aung San Suu Kyi has asked the public to file a complaint with her government’s Complaints Department if a household believes it has been unjustly deprived of a cash assistance payment.