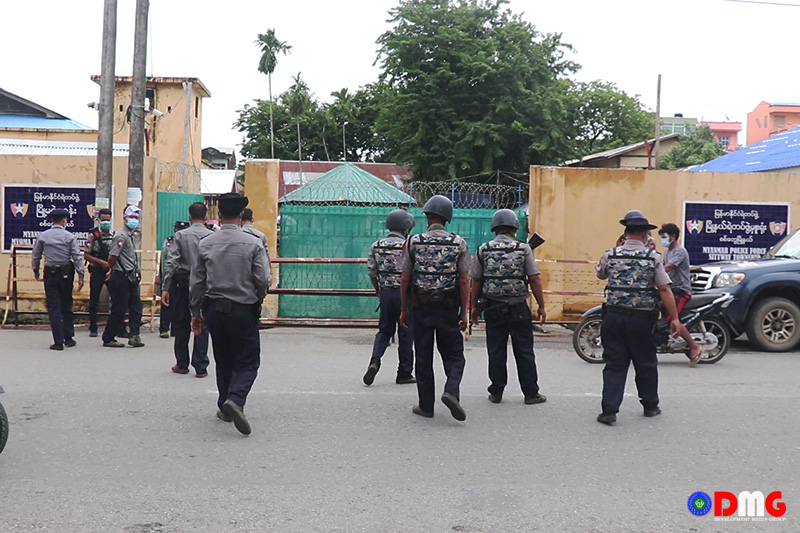 Families can open cases seeking the release of civilian relatives detained on suspicion in Arakan State at the relevant police stations, according to Maj-Gen Zaw Min Tun of the Tatmadaw True News Information Team.

The military spokesman made the remarks at a news conference in Nay Pyi Taw on November 27, speaking in relation to the long-term detention of residents of Tinma village in Kyauktaw Township.

“At this time, doing things like that will become easier. It is good for both sides. There are two ways, or procedures, for informing: As far as I know, directly informing means through legal channels. Opening a case means informing the police,” he said.

“Police stations will inform us [the military] if there is any suspicion. Or, they will inform any other organisation or individual,” said Maj-Gen Zaw Min Tun.

“Concerning detentions, we do investigations and we do ask questions and we do detentions, as I have repeatedly mentioned. However, we follow court procedures. If there is [exculpatory] evidence, then report it to the respective departments. This side [the military] can then say yes or no officially,” Maj-Gen Zaw Min Tun said.

On March 16, the Tatmadaw’s Light Infantry Division No. 55 detained and interrogated more than 40 Tinma villagers, subsequently setting the elderly among them free. But the military reportedly took 18 villagers including Grade 8 student Maung Tun Tun Wai to a nearby hilltop, and they have not been heard from since.

The families of the detainees say they have lodged complaints with the relevant police station and have spoken to authorities about their loved ones on multiple occasions, to no avail.

The Pyithu Hluttaw representative for Kyauktaw Township, U Oo Tun Win, said with the Tatmadaw spokesperson’s remarks this week, there is hope for the villagers’ release via the channels outlined by the major-general.

“The families are still waiting for the time when they will be freed,” the MP said.

At the families’ behest, the Arakan Human Rights Defenders and Promoters Association complained about the Tinma villagers’ prolonged detention to the offices of the President and State Counsellor, as well as the Myanmar National Human Rights Commission, but there has reportedly been no reply to date.