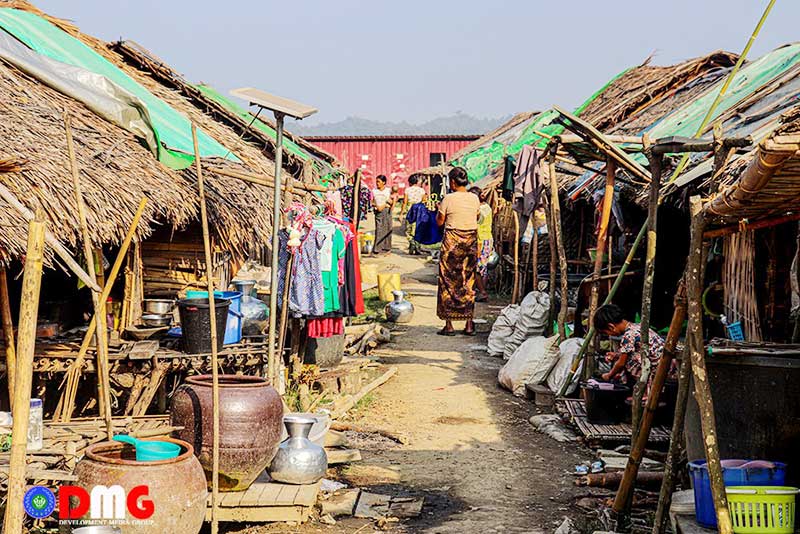 The Myanmar government and International Committee of the Red Cross (ICRC) have teamed up to educate internally displaced people (IDPs) in Arakan State about the risks of landmines.

IDPs at displacement camps in Mrauk-U Township were advised on Tuesday about how to avoid landmines.

U Kyaw Shwe Than, manager of Mya Tazaung IDP camp, said: “We were explained about the risks of landmines, and consequences of mine blasts. They didn’t distribute pamphlets. They explained by using posters.”

Despite the fact that military tensions have eased in northern Arakan since November, IDPs still have concerns about returning to their homes due to the risks of landmines and other explosive remnants of war (ERWs). Many have called on the government to clear unexploded explosives before their return.

“We live in poverty and are dependent on the forests for livelihoods. We have seen people who have died or were injured while going into the forest [to look for food]. So, only when the landmines are cleared and it is safe, we will return to our homes,” said U La Pyae Aung from Auk Thakan village, who is sheltering at Tin Nyo IDP camp in Mrauk-U Township.

There were 39 explosions of landmines and ERWs in 2019, in which 19 civilians were killed and 39 injured. The number increased last year with 45 killed and 89 injured in 61 explosions. Children accounted for nearly half of the casualties and injuries, with 17 and 64 killed and wounded, respectively, in 2019 and 2020.

“Currently, with the funds provided by USAID, we are conducting a mine education programme and distributing pamphlets in six townships. We distributed pamphlets to 600 people from war-hit villages and IDP camps. And each of those 600 people shared his newly learnt knowledge with 10 people,” said REC Secretary Ko Zaw Zaw Htun.

The Arakan State parliament has passed a proposal urging the government to clear landmines to ensure the safe return of IDPs to their homes.

Arakan State Security and Border Affairs Minister Colonel Min Than has said the Tatmadaw would clear landmines after it has reached a concrete agreement with the Arakan Army (AA) over troop deployments in the affected areas.

IDPs have begun returning to their homes with the Myanmar military and the AA observing an unofficial ceasefire since early November, but the majority remain in camps due to concerns over lingering issues including landmines.