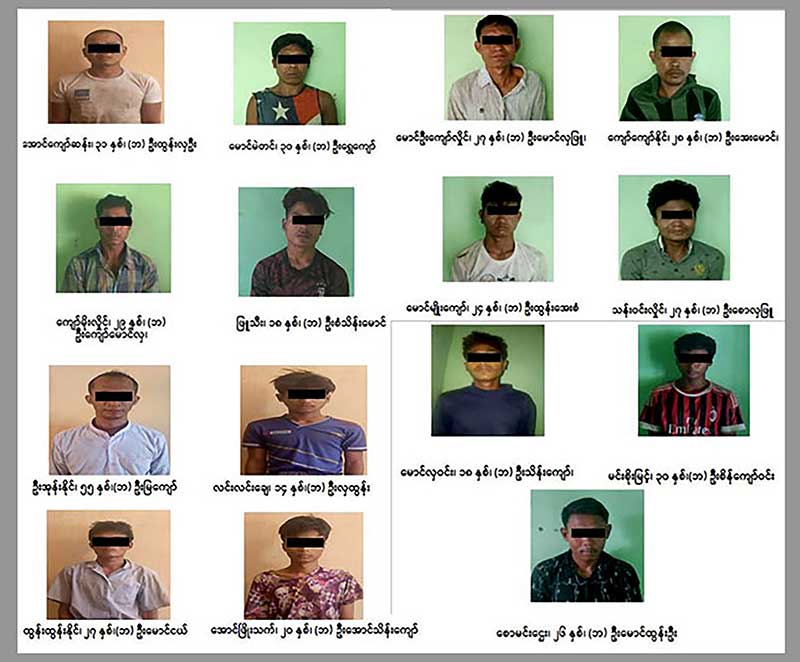 “They were charged for allegedly supplying food to the AA [Arakan Army]. But they had permission from the Kyauktaw Township administrator to carry the rice. Considering that, the judge acquitted them,” defence lawyer U Aung Than Win told DMG.

Fourteen IDPs sheltering at Kyauktaw Township’s Nyaung Chaung village and a village administrative clerk were arrested in April 2020 at a military checkpoint on suspicion of having ties to the AA. The group of 15 had gone to the township administrative office to withdraw 150 sacks of rice for IDPs and on their way to the camp they were held up and questioned by Tatmadaw soldiers before being taken into custody.

Captain Hein Htut Zaw of the Tatmadaw’s Kyauktaw-based Light Infantry Battalion No. 375 opened the case against them. Three were subsequently released on bail as they were minors at the time. They are, however, still facing trial in juvenile court.

“My son and others were beaten during interrogation. Their hearing was affected, and their bodies still ache. They haven’t yet recovered. Anyway, I am happy that they are released,” said Daw Aye Aye Soe, the mother of one of the men acquitted on Friday.

According to the Thazin Legal Institute, 362 people were arrested on suspicion of having ties to the Arakan Army over the course of some two years of fighting between the Tatmadaw and the ethnic armed group in Arakan State.

A total of 78 — one from Mrauk-U District, four from Kyaukphyu District, one from Maungdaw District, 67 from Sittwe District and five from Thandwe District — have so far been released due to lack of evidence.