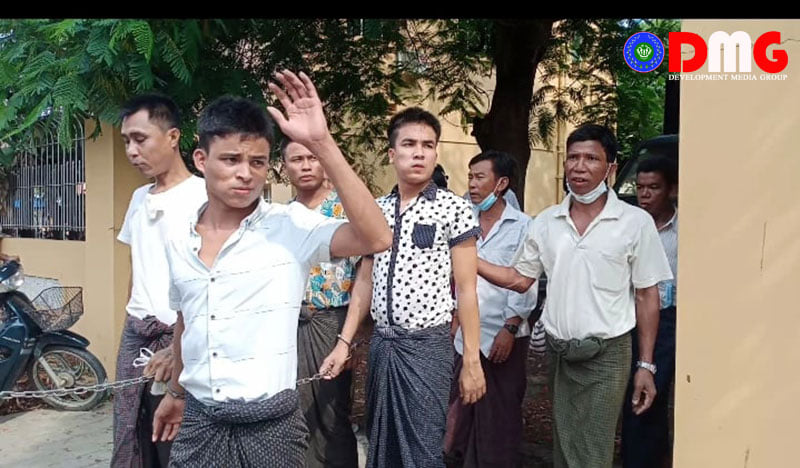 A verdict in the case of five men from Kyaukseik village, Ponnagyun Township, and nearby who were detained in 2020 and charged on suspicion of having illegal ties to the Arakan Army (AA) was postponed, according to family members.

“The Sittwe District Court rescheduled the hearing for June 1 because the judge was reportedly not allowed to deliver a verdict,” Daw Ni Ni Aye, the mother of one of the detained men Ko Nyi Nyi Aung, told DMG.

They were arrested by a Myanmar military contingent in Kyaukseik village on April 19, 2020, and have been on trial for some two years, with family members expressing frustrations and dismay about repeated delays to the legal proceedings.

They have been charged by Captain Tint Naing Tun from the military’s Ponnagyun-based Battalion No. 550 under Sections 50(j) and 52(a) of the Counter-Terrorism Law.

All of the witnesses in the case against the five men have been examined, but a verdict has yet to be delivered. Family members say the defendants have been immeasurably harmed by the repeated delays to a verdict.

“The Arakan Army has also been delisted as a terrorist group,” Daw Ni Ni Aye noted. “I want to ask why they were not released. I will not be able to come to the next court hearing. Today, I had to come to the court hearing in the midst of food and clothing problems.”

On March 11, 2021, the Anti-Terrorism Central Committee said that it had removed the AA from its list of terrorist groups.

A video of the five Kyaukseik defendants being beaten during interrogation by Myanmar military soldiers on board a naval vessel was shared widely on social media in May of 2020.

The court also rescheduled the case of two locals from Ai Tin village in Ponnagyun Township, who were arrested on suspicion of AA ties in March 2020, for June 2, family members said.

The two men have been identified as U Maung Saw Aye, 32, and his nephew Ko Nay Lin Htay, 25. They were arrested at the Kyauktan checkpoint on the outskirts of Sittwe on March 5, 2020, upon returning to their village in Ponnagyun Township by motorbike. Captain Aung Phyo Myint from the Myanmar military’s No. 907 Engineering Regiment filed a lawsuit against the two men on terrorism charges.

“We need money to come to the court hearings because we are struggling to make ends meet,” said U Aun San Mra, the father of detainee Ko Nay Lin Htay.

Myanmar’s military regime pardoned more than 1,600 prisoners on April 17 to mark the Thingyan Buddhist New Year, but detainees facing trial for alleged AA links were not among those released, according to human rights monitors.

More than 70 people are currently facing trial and remain behind bars in various prisons for alleged AA ties, according to figures compiled by local civil society organisations.