Since renewed fighting erupted between the Myanmar military and the Arakan Army (AA) in August, 23 houses were razed by artillery strikes and junta arson attacks in Arakan State.

According to a DMG tally by township, 11 houses were burnt down in Maungdaw, three houses in Buthidaung, eight houses in Ponnagyun and one house in Kyauktaw.

In one instance, the AA attacked junta troops deployed at a monastery in the ethnic Mro village of Wetkyein, in northern Maungdaw Township, where a local resident told DMG that he saw houses on fire during the five hours of fighting that ensued.

Villagers reported that seven houses were burnt down when they returned to assess the aftermath in their village the following day. Most residents of Wetkyein have fled to Khone Taing and Myawaddy villages, said a resident.

Junta troops are also accused of setting two houses on fire in Hparwutchaung Village, Maungdaw Township, on October 10. Myanmar’s military regime and the AA have traded blame for the arson. 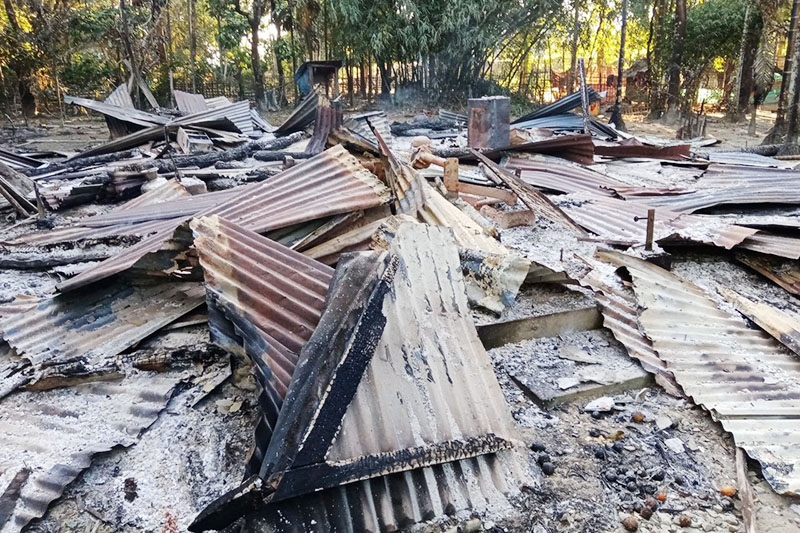 “Two houses were burnt down due to artillery strikes. The families from those two houses are staying at the houses of their relatives in the village,” said a Yanaungpyin Village resident.

A free school, a hostel and a dining hall were torched at a Buddhist monastery in Khamaungseik Village, in northern Maungdaw Township, on August 30, according to local residents.

“Three houses including mine were torched. Since then, we have been living at a displacement camp. And we have difficulties,” said one resident.

“Myanmar military soldiers came and torched houses that day. In my house, harvesters and motorbikes were also burnt in the fire,” said a resident of Sin Inn Gyi Village. The financial loss was around 20 million kyats. I have been staying at the house of my relatives in another village. I don’t know if I can rebuild my house.”

Junta troops also set fire to a house in the village of Kaung Toke in Kyauktaw Township on October 5.