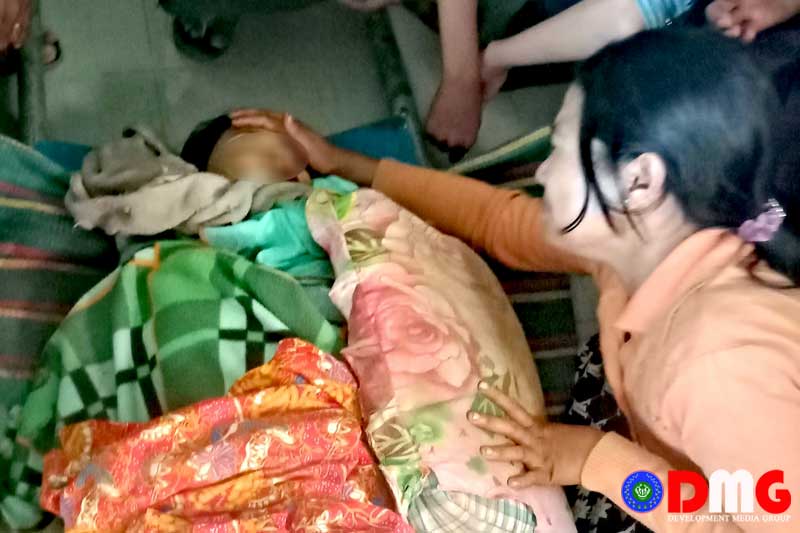 A 42-year old village administrator in Minbya Township, Arakan State, died of injuries after he was struck with a rifle butt by some members of a military troop and a mother was killed by bullet wound on the night of 11 December, family members told the DMG.

A military troop entered Seitara village at about 11 p.m. and went to the house of village administrator U Nyan Thein. He was beaten died at his home.

Daw Phyu Phyu Win, 39, was hit by a bullet and died, a relative of the village administrator said.

The administrator died from a head injury and Daw Phyu Phyu Win received injuries in her chest and subsequently died.

Fathers of the victims have reported to the Minbya township police to open cases and take effective actions on perpetrators.
U Maung Kyaw Nu, father of Daw Phyu Phyu Win, said he was angry because his daughter was killed unfairly.

“I feel angry that my daughter was killed unjustly. I feel very sad. My daughter has three children. I assume that they fired guns just to torture people,” he said.

Police captain Aung Mya Than from Minbya township police station confirmed their report but denied to elaborate in detail.

The DMG phoned spokesperson of Western Command Colonel Win Zaw Oo, but he could not be reached.

The Tatmadaw has suspected that members of the Arakan Army (AA) are living in some Arakan villages by disguising themselves as villagers. So the Tatmadaw inspected the villages frequently.

The Tatmadaw also inspected 275 villagers at the school at Kyauktan village in Rathedaung Township on 2 May. While the Tatmadaw was investigating, six villagers were killed and eight were injured due to the Tatmadaw’s shooting.

The Tatmadaw said that it had to take action because villagers chanted and tried to assault the security force members. However, the injured said the Tatmadaw fired when a person with amental disability shouted.