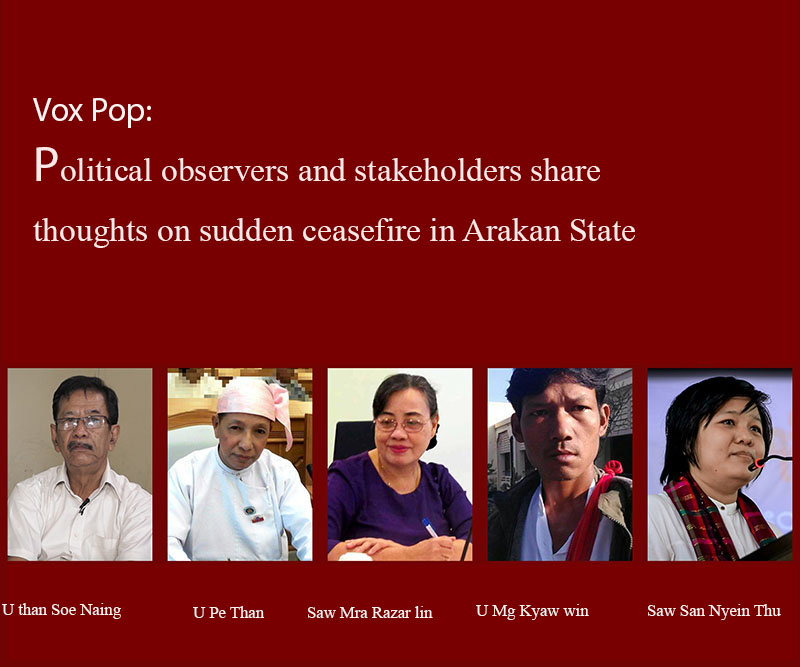 After months of renewed hostilities beginning in August, the Myanmar military and Arakan Army (AA) reached an informal ceasefire on November 26. The ceasefire was brokered by the chairman of Japan’s Nippon Foundation, Yohei Sasakawa.

The informal truce was observed on humanitarian grounds, according to the AA spokesman, who said Arakan State’s residents have been suffering for months from junta blockades of roads and waterways, and indiscriminate junta artillery strikes.

Political analysts, members of ethnic armed organisations, social activists and residents shared their views on the abrupt halt to the fighting in Arakan State.

According to AA spokesman U Khaing Thukha, local residents have suffered a lot from the fighting, and the number of people displaced by the fighting is increasing. The ceasefire was observed to alleviate this. He said there is also a need to create relative stability for the people, as it is harvest time now.

People are also suffering the same in Sagaing, Magwe, Chin and areas controlled by the Karen National Union, the Kachin Independence Army, the Karenni National Progressive Party and so on. In Sagaing and Magwe regions, the central part of the Bamar State, locals can’t harvest their paddy fields, and the regime is even destroying their paddy fields. In other parts of the country, locals have their farms torched and their belongings looted by the regime.

Under such circumstances, there is a need to think about whether it is appropriate to halt the fighting in Arakan State only and for the interests of Arakanese people. While ethnic armed organisations are cooperating today with the National Unity Government to end the military dictatorship, there is a need to think about if the ceasefire could hamper the progress of the Spring Revolution.

I think there are also political and military reasons behind the ceasefire, and humanitarian need is not the only reason. The AA upholds its Way of Rakhita, and its objective is to establish a confederate Arakan State. So, there might be engagement and discussions between the two sides regarding the AA’s desire for confederate status. While all the EAOs [ethnic armed organisations] are cooperating with the NUG to fight the regime, the AA’s private ceasefire with the regime will impede the combat capability of other forces and the progress of the fighting.

I don’t think the ceasefire will hold for long. It is just a temporary truce to meet the requirements of Arakan residents and alleviate their hardships. The regime has not decreased its presence in Arakan State [due to the ceasefire]. And the AA will not halt its administrative and judicial functions either. As the AA expands its administrative network, the regime will bring in more forces to counter and destroy them. The truce will collapse then.

The regime has imposed travel restrictions in Arakan, and banned the delivery of food supplies, and disrupted livelihoods. Farmers can’t harvest their crops. And the regime shells villages. Such things happen on a daily basis in Arakan. So, the AA has observed a ceasefire on humanitarian grounds, to ease the sufferings of the people.

The regime was deliberately causing troubles for people in Arakan. They opened fire on villages when there was no fighting. They kill civilians and torch houses. The ULA/AA has thus observed a temporary ceasefire to alleviate hardships.

The regime was deliberately committing those acts to discourage people from cooperating with the ULA/AA. The ceasefire will create breathing space for the people. People will be able to earn their livelihoods, and farmers will be able to harvest their crops. The crisis will be resolved for now. But there are uncertainties about how things will develop in the long run.

I heard U Khaing Thukha said that troops of both sides will remain in the places where they currently are. But we don’t know how they will de-escalate tensions. As for the people, they want to see problems being solved peacefully.

During the fighting, many people were affected and suffered a lot. Many villages were destroyed by the fighting. Therefore, the armed forces have to fight, because fighting is inevitable. Therefore, the armed forces should negotiate through dialogue. If there is a fight, both sides will suffer and the people will be the victims. Therefore, I think it is a good thing to have a ceasefire between the two sides. I believe that after this step, we can move forward and bring positive peace to the country.

We want to return home. Who doesn’t want to go back home? The ceasefire between the AA and the military is not an official agreement. It is still uncertain whether the refugees will find peace and return to their homes because of the informal ceasefire between the AA and the military. We will have to wait and see if there is a possibility of another fight. We miss home so much, but going back depends on how things will turn out in the future.

If there is fighting, we will face a lot of difficulties. If there is fighting, we have to struggle to fulfil our children’s requirements as they are students, and to make ends meet. We also face travel barriers and the risks of landmines if we return home. I couldn’t believe it when I heard the news that the ceasefire had been reached. We are very happy to hear the news. We have a lot to think about when it comes to whether it will become a reality.

There was a lot of damage to the people due to the fighting that took place in Arakan State. As a follow-up, the military blocked off land and water routes in Arakan State. When there are restrictions on the economy and food products, the public’s right to healthcare is affected. Due to the shortage of food products, there are also many people who are faced with food and livelihood difficulties.

The people of Arakan have faced situations ranging from drug shortages to roadblocks and lack of access to medical treatment.

This ceasefire will take many forms in situations where the two sides would otherwise have fought each other. There will also be situations where the other side seeks a political solution after a complete ceasefire. In any case, we would like to say that we are happy to be on the side of the public; to bring about a situation where the public is not harmed by fighting. Through this humanitarian ceasefire, we hope to bring about a better ceasefire and peace, and a situation where people’s lives can move toward security, peace, and development.