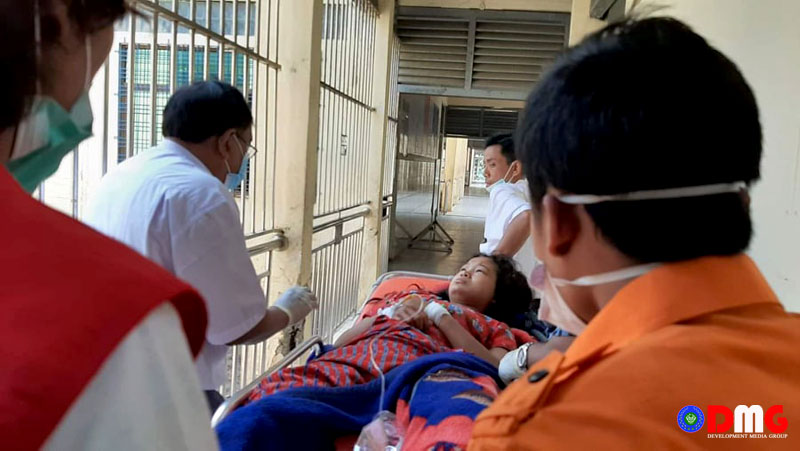 Five civilians were killed and eight were injured on Wednesday evening when heavy weapons and small arms fire tore through the town of Kyauktaw in Arakan State, according to a local MP and residents.

“As soon as they heard the sound of firing, they hid at their houses. The dead were hit by bullets while they were at home,” said U Oo Tun Win, the Pyithu Hluttaw lawmaker for Kyauktaw Township.

The five killed included a mother and her teenage daughter, and a 72-year-old man from neighbouring Ywarma Pyin village.

The shooting also injured eight others ranging in age from 9 to 60 years old. At least one person, 17-year-old Ma Moe Moe Nwe, was brought to Sittwe Hospital with wounds to her thigh, knee and torso.

One injured man, Ko Nay Lin Than, lives at a camp for internally displaced people (IDPs) in Kyauktaw town and works for a welding workshop there.

“It looked like it was raining bullets last night. … When I came back from work, I was shot from a Tatmadaw navy [unit]. My index finger was blown off,” said Ko Nay Linn Than, 25.

Those injured and the parliamentarian U Oo Tun Win accused a Tatmadaw naval presence in the area of being the source of the gunfire.

Regarding that accusation, DMG attempted to contact Colonel Win Zaw Oo of the military’s Western Command and Brig-Gen Zaw Min Tun from the Tatmadaw True News Information Team, but they did not respond to requests for comment.