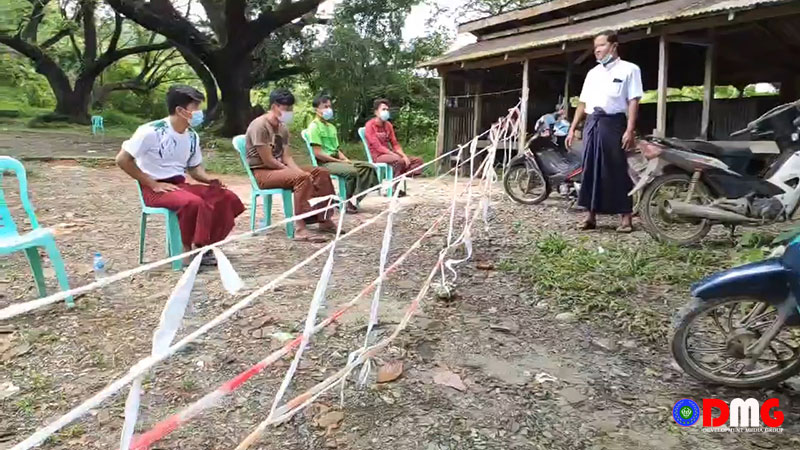 Five people who were arrested after entering Arakan State’s Thandwe Township in an ambulance on September 23, at a time of heightened movement restrictions due to COVID-19, are maintaining that they informed local authorities of their travel plans in advance.

Ko Soe Nay Min, one of the five people now being held at a quarantine centre in Thandwe, told DMG that there was nothing untoward about their unconventional arrival in southern Arakan State.

“We heard that action will be taken against us. We don’t want to be punished for returning to our hometown. We had already decided to go to the quarantine centre as soon as we arrived in Thandwe,” he said.

Ko Soe Nay Min and the other four travellers had sought to obtain medical certificates from the relevant hospitals to travel to Thandwe from Yangon but they were unable to get that documentation.

The five detainees — four men and one woman — entered Thandwe after notifying the relevant officials step by step, according to U Zaw Zaw Tun, the administrator of Jadetaw Ward in Thandwe Township.

“We heard that people holding Arakan State identity cards in Yangon are having difficulty finding a place to live. That’s why people who could afford to pay money returned home by a rented car,” he said. “They came back home by what was described as ‘illegal means’ because they were not recommended by the respective administrators. The reports that went viral on social media that they illegally entered Thandwe are incorrect.”

The detainees had been working in the Yangon Region townships of Thaketa and Thanlyin. They paid a fare totalling K350,000 — K70,000 per person — to enlist the ambulance as transport, the detainees said.

DMG attempted to interview the ambulance driver and his colleague, who have also been detained, but was not allowed to do so.

A DMG reporter visited the Thandwe police station on September 24 to inquire about the matter and he was told by an on-duty officer that seven people were charged under Section 29 and Section 30(a) of the Natural Disaster Management Law.