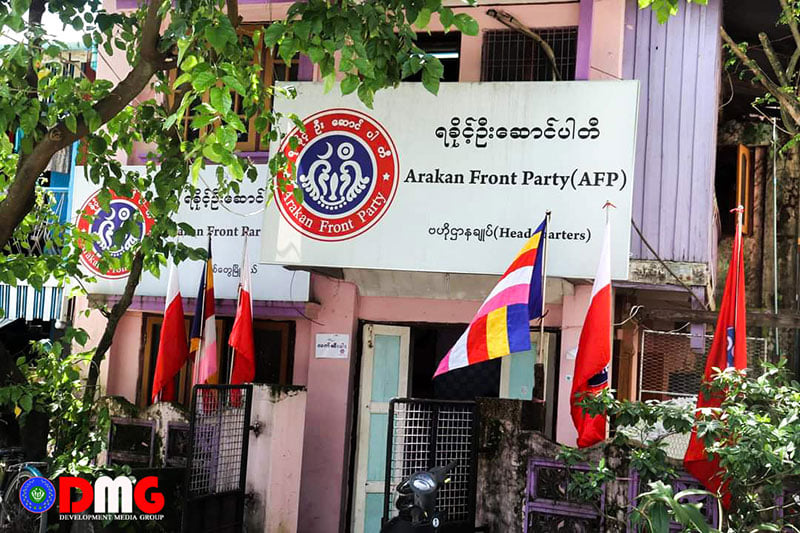 Members of the Arakan Front Party (AFP) leadership including Dr. Aye Maung have not been allowed to officially resign from the Arakan National Party (ANP) by the latter, so they have sought assistance from the military-appointed Union Election Commission (UEC), AFP officials said.

At a meeting in Naypyidaw on February 26, they asked the new UEC to help them resign from the ANP, according to U Kyaw Zaw Oo, vice chair of the AFP.

“More than five people including Dr. Aye Maung, who will head the AFP, have yet to be allowed to resign from the ANP. They appealed to the UEC to help them,” he said.

Dr. Aye Maung, a former chair of the ANP, and former Amyotha Hluttaw lawmaker U Khin Maung Latt, as well as former Arakan State Hluttaw MPs U Kyaw Lwin, U Wai Sein Aung and U Aung Than Wai, have not been allowed to officially resign from the ANP.

The AFP did not discuss other topics at Friday’s meeting, and the party was told that a response would be conveyed after members of the UEC discussed the matter, U Kyaw Zaw Oo said.

Fifty-three out of 91 registered political parties including the Union Solidarity and Development Party (USDP), ANP and AFP attended the meeting with the new UEC, with 38 parties not attending. The ANP did not raise any points for discussion during the meeting on February 26.

Political parties and people involved in political affairs need to be big-hearted, said former Arakan State Hluttaw lawmaker U Kyaw Lwin, who is AFP patron while also being one of the ANP members not allowed to resign.

“A party leader or a member should have freedom. If someone wants to leave a political party, he/she ought to be allowed to resign. When a party is prohibiting the resignation of a member or a leader, it becomes an ugly image for the party,” he said.

“Additionally, I think it is an act of coercion,” he continued. “It means it does not allow you to join another party; [for example], if a member of the AFP wanted to contest in the election, but couldn’t because that member is not allowed to resign from the ANP. So, I have to compete in the election as an independent candidate.”

U Pe Than, who sits on the ANP’s policy steering committee, said the matter should not be referred to the UEC, adding that the commission was not meant to solve problems within or between political parties.

“I want them [would-be resignees] to come and discuss at the ANP. They should inform the party to resign. Some members resign without saying anything, but some blame the party before they resign. Some have yet to pay the contributions to the party. So, the decision to allow them to resign the party depends on the situation of an individual,” he said.

Dr. Aye Maung was previously chair of the ANP, but he tendered his resignation from the party in November 2017 and applied to form the AFP in 2018.