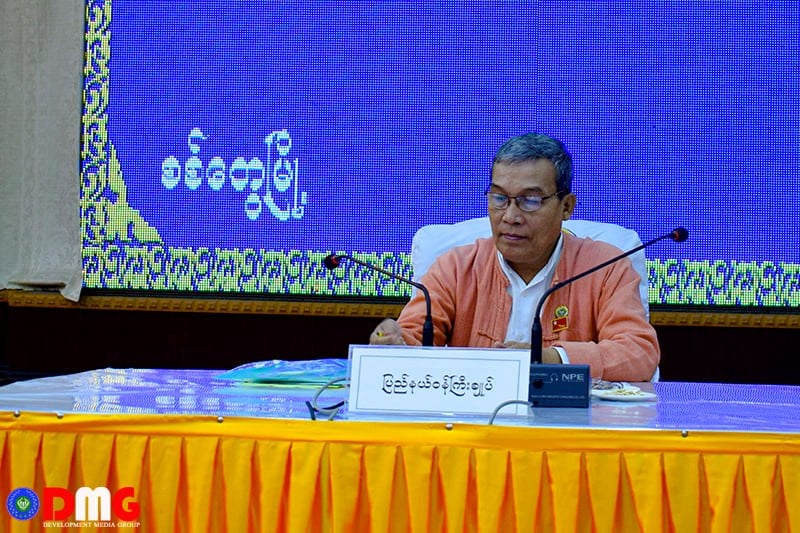 A court in Sittwe on Wednesday heard the plaintiff in the case of ousted Arakan State Chief Minister U Nyi Pu, who has been charged with incitement under Section 505(b) of the Penal Code.

Defence lawyer U Aung Sitt Min said the judge rejected his request to postpone the trial to a later date.

“Because I have not been allowed to meet my client in prison, I have not made any preparation to defend him. So, I asked the judge not to hear the case today, and allow me to meet U Nyi Pu ahead of the next court hearing,” said U Aung Sitt Min.

The judge, however, rejected his request and on Wednesday heard the plaintiff in the case, Sittwe Township Deputy Administrator U Kyaw Thein.

U Nyi Pu was arrested along with other leaders of the democratically elected National League for Democracy (NLD) government when the military seized power in a coup on February 1. The Tatmadaw regime released him after two days and placed him under house arrest, but again took him away on February 10 after he criticised the coup on social media the day prior.

U Kyaw Thein filed a lawsuit against U Nyi Pu under Section 505(b) of the Penal Code on February 22, when the deposed former chief minister made his first virtual court appearance.

U Nyi Pu is being held in military custody and has not been allowed to see family or his lawyer, said U Aung Sitt Min.

“According to Article 347 of the Constitution, every citizen is entitled to equal rights before the law. U Nyi Pu is also a citizen. So we have demanded, in line with the law, his legal rights to see a lawyer and defend against the accusation,” he said.

The next court hearing is scheduled for April 21.