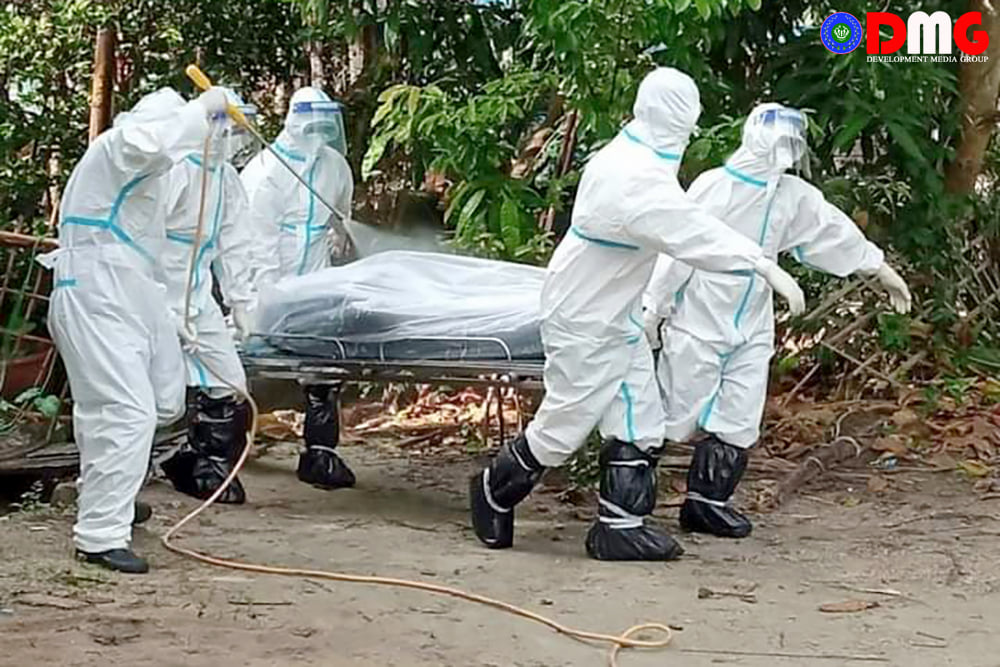 The death toll from Covid-19 is steadily rising in Arakan State, with multiple reported deaths due to lack of oxygen.

It is against this backdrop that U Hla Thein, attorney-general for the Arakan State Administration Council, told media on July 14 that there are enough oxygen cylinders for virus patients in the state.

The remarks by the spokesman for the Arakan State military government fell short of addressing the problem of hypoxia in practice, said writer Wai Hun Aung, who is involved in philanthropic activities in the state.

The son of a virus patient who died while being treated at Sittwe General Hospital told DMG that his father had died from a lack of oxygen.

“My father needed two oxygen cylinders, but he was given only one oxygen cylinder. The oxygen lasted only 10 minutes. I went to the hospital staff to ask for more oxygen, but they did not come. My father died due to a lack of oxygen in time,” he said.

DMG contacted officials at Sittwe General Hospital, but no one was available to comment.

Oxygen generators are being set up in some townships in Arakan State on a self-reliant basis, led by local people and civil society organisations.

Myanmar’s healthcare system has been stretched to the breaking point as Covid-19 infections rise to unprecedented highs amid a civil disobedience movement (CDM) in protest of the military regime and its February 1 coup. The CMD has included many hospital staff across the country who have refused to work for the junta.

As of July 19, a total of 1,542 coronavirus cases and 54 deaths were reported in Arakan State during the pandemic’s ongoing third wave, which began in May.