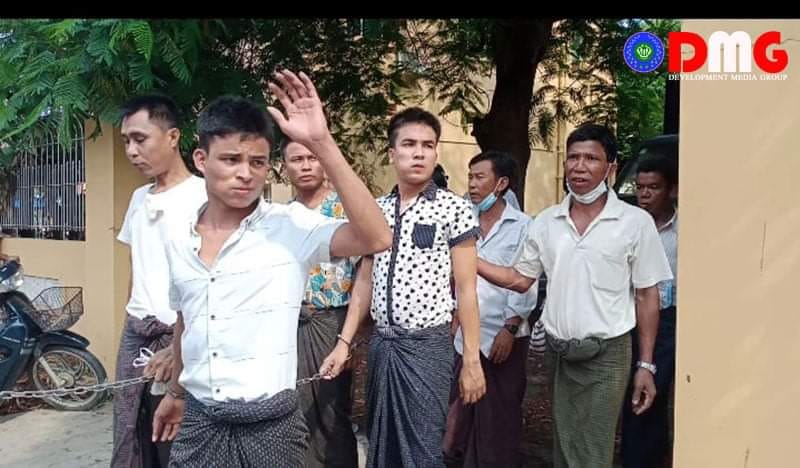 A case involving five men from Kyaukseik village and its vicinity in Arakan State’s Ponnagyun Township, who were arrested on suspicion of having links to the Arakan Army (AA) and charged under the Counter-Terrorism Law, has been delayed due to the absence of a prosecution witness.

In the case against the five men, eight of the nine prosecution witnesses have already been examined, but the lack of testimony from the remaining witness is holding up trial proceedings, according to a lawyer representing the defendants.

“They were arraigned in Kyaukseik today, but the commissioner hasn’t come to the court. The court hearing has been rescheduled for November 1,” said the lawyer, U Kyaw Nyunt Maung.

A total of 38 people from Kyaukseik village and its vicinity were detained by the Tatmadaw on April 19, 2020. Thirty-three were subsequently released but the other five remained in custody.

A video of the five being interrogated by soldiers on board a boat during their detention was shared widely on social media in May of last year.

That same month, the military announced that it would take legal action against those among its ranks who had tortured the five detainees in the video.

But the rare admission of misconduct by its personnel did not stop the military from moving forward with prosecuting the victims of the abuse. Captain Tint Naing Tun from Ponnagyun-based Light Infantry Battalion No. 550 filed a lawsuit against the five villagers under Sections 50(j) and 52(a) of the Counter-Terrorism Law on April 23. The charges carry a maximum sentence of life in prison.

Family members of the detainees are frustrated that the case against the Kyaukseik five has dragged on for well over a year.

For months, many people in Arakan State have been hoping that those facing Counter-Terrorism Law charges in relation to alleged AA links would be released after the junta removed the designation of the ethnic armed group as a terrorist group on March 11.

More than 200 people were arrested and charged under the Counter-Terrorism Law after being accused of illegally associating with the AA during some two years of fighting in Arakan State, according to data from the Thazin Legal Institute. The military council has withdrawn some of those cases after it de-listed the Arakan Army as a terrorist organisation.

At present, 96 people have been released from prisons in Arakan State due to an amnesty coinciding with the sixth anniversary of the Nationwide Ceasefire Agreement’s signing, along with the dismissal of some cases, but more than 100 are still being detained.