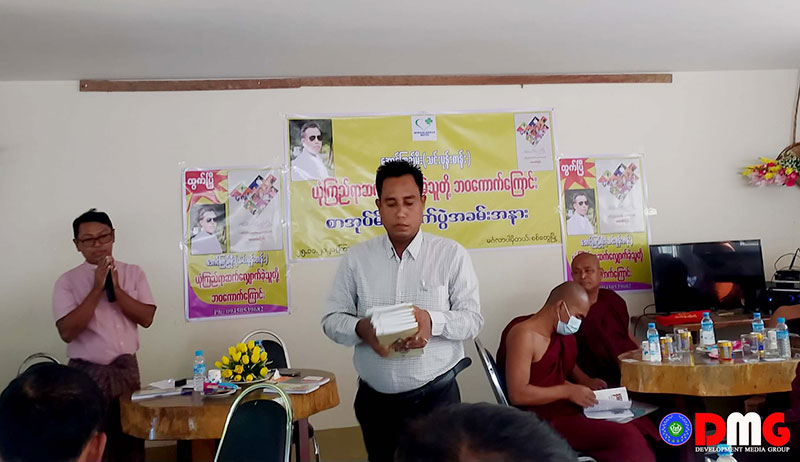 The Arakan State-based writer Aung Kyi Moe (Thin Pone Tan) held the launch ceremony for his second book, entitled “A Biography of Successful People,” at the Mingalarpa Motel Hall in Sittwe on November 25.

The event in the Arakan State capital was attended by fellow writers, poets and literary enthusiasts.

Speaking at the book launch, Aung Kyi Moe said he wanted to let readers know that there are successful people in Arakan State who are worthy of emulation.

Wai Hun Aung, a writer and a well-known philanthropist in Arakan State, shared his views on the publication of the book at Thursday’s launch event, saying the Arakanese literary canon remains relatively small.

“I am grateful to the Arakan literature community for publishing a book like this in this area, and I think it will be of some benefit to readers,” Wai Hun Aung said. “Literature has flourished in Arakan State for generations. We are very happy that there are writers who bring literature to Arakan State. I welcome and take pride in the publication of the book.”

Aung Kyi Moe’s first published book is entitled “Those Who Crossed the Sunset.”

Writer Laywati Tun Saw Khaing, who attended the event, criticised what he described as a declining reading rate among young people.

“Young people should not only use Facebook, but also study other relevant economic, educational and political issues, instead of looking at bad pornography because they are too young to tell the difference between right and wrong. Young people should avoid bad deeds,” he added.

Aung Kyi Moe is a regular contributor to the Arakan State-based news media as well as mainstream media in Myanmar proper.