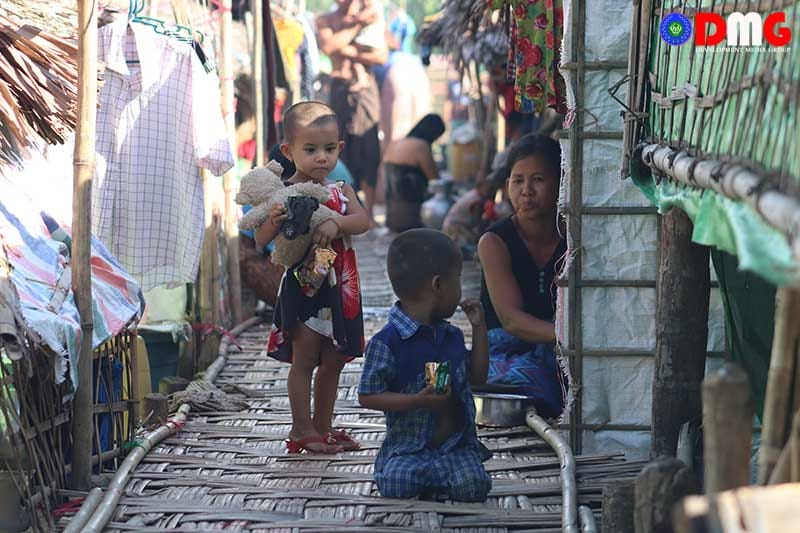 Myanmar’s military regime is forcing internally displaced people (IDPs) in Kyauktaw Township, Arakan State, and Chin State’s Paletwa Township to return to their homes amid renewed conflict between the military and the Arakan Army (AA).

The military regime in early September instructed General Administration Departments in the respective townships to order IDPs to return to their homes. Local administrators then notified displacement camp managers of the directive.

A resident of Yee Mawa Village who is taking shelter at a displacement camp in Paletwa town said he did not want to return home due to frequent clashes between the Myanmar military and the AA.

“I don’t want to go back. Landmines have not yet been cleared in my native village. And there have been clashes in the area. They said we must return in October,” he said.

There are five IDP camps in Paletwa town, and more than 1,000 residents from at least nine villages displaced by the recent fighting are sheltering in Paletwa town and along the Indian border.

The military regime has also reportedly ordered IDPs in Kyauktaw Township to return to their homes in October, warning that it will officially prohibit the supply of relief aid from local and international nongovernmental organisations including United Nations aid agencies.

“Some villages including Tinma Gyi, Ahtet Tinma and Pyaing Taing were badly burnt, and villagers can’t return unless houses are rebuilt for them there,” said a displaced person from Nyaung Chaung IDP camp in Kyauktaw Township. “The notice from the government [regime] said UN [agencies] and NGOs will be officially barred from supplying IDP camps if we don’t return to our homes.”

There are over 10 IDP camps in Kyauktaw Township, with a population of more than 4,000 IDPs.

DMG was unable to obtain comment from the spokesman for Arakan State’s military government, U Hla Thein, regarding the junta’s resettlement order.

Nearly 9,000 people have been displaced by renewed fighting in Arakan State, according to a September 27 report from the UN Office for the Coordination of Humanitarian Affairs.

The regime has also barred local and international NGOs that supply food and other humanitarian assistance to IDPs from travelling to Maungdaw, Buthidaung, Rathedaung, Minbya, Mrauk-U and Myebon townships since September 16, citing security concerns.