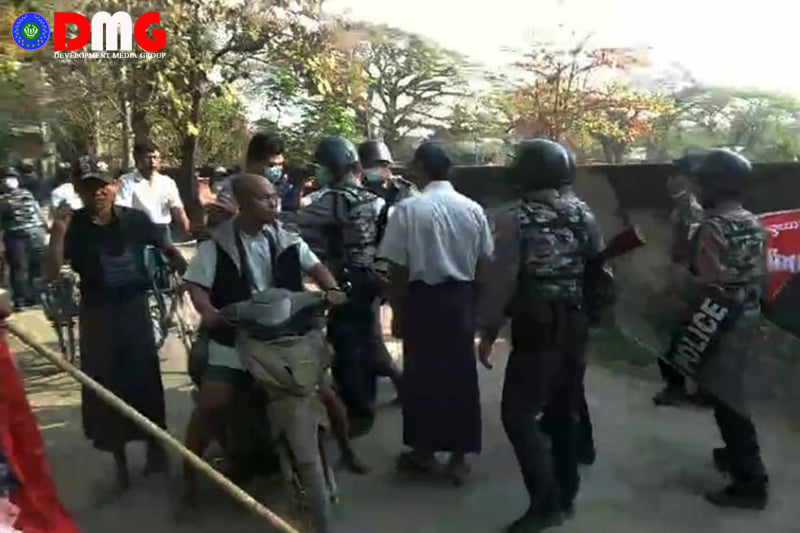 Lawsuits have been filed against three residents of Taungup Township, Arakan State, who were detained over a protest on February 28 and charged with two offences, family members said.

The cases have been opened under Section 505(a) of the Penal Code, an incitement provision, and Section 19 of the Peaceful Assembly and Peaceful Procession Law.

The associate secretary of the Arakan League for Democracy (ALD), U Kyaw Kyaw Lin, and residents Ko Hlaing Min Tun and Ko Zar Nay Htoo, were arrested during Sunday’s protest in Taungup town.

They are being held at the Taungup Myoma police station and family members have not been allowed to meet with them.

Ma Thanda, the younger sister of Ko Hlaing Min Tun, said: “I asked the police to meet with my brother. However, I am not allowed to meet with him. The head of the police station said lawsuits have been opened against them under Section 505(a) [of the Penal Code] and Section 19 of the Peaceful Assembly and Peaceful Procession Law.”

“I am worried for them because we cannot see them,” she said.

U Myo Kyaw, general secretary of the ALD, said: “We are investigating if they can be granted bail and if lawsuits have been opened against them. We cannot confirm it.”

DMG attempted to phone the Taungup Myoma police station seeking comment on the reported opening of lawsuits against the trio, but no one there could be reached.

Across Arakan State, more than 20 residents of Ann, Taungup, Manaung and Thandwe townships have been arrested over protests against the junta regime in recent days.

An Ann Township court on February 24 handed down K80,000 fines each to seven residents for offences under the Natural Disaster Management Law, and Peaceful Assembly and Peaceful Procession Law.