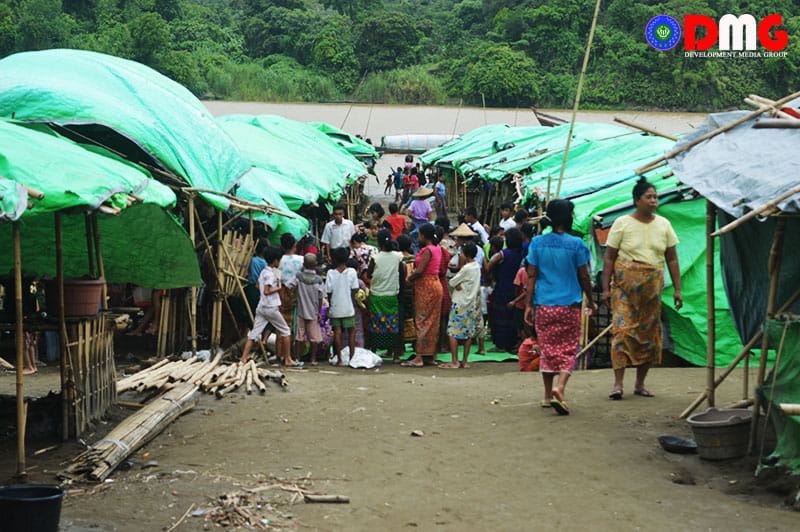 Priority is being given to distribution of Covid-19 protective equipment to camps for internally displaced people (IDPs) in Arakan State, said U Than Tun, a member of the Arakan State Administration Council.

“The Arakan State Administration Council is making arrangements to distribute virus protective equipment such as masks, soaps and hand sanitiser to the IDP camps in Arakan State on a prioritised basis. The state military council ordered the masks from the Department of [Public] Health. I think they will arrive soon,” he said.

An exact date for the arrival of the Covid-19 protective equipment has not been announced, but the medical items will be distributed to the IDP camps as soon as they arrive, he added.

The Arakan State Administration Council previously told DMG that local authorities in the districts and townships have been instructed to prevent the spread of Covid-19 in the IDP camps.

But U Kyaw Thein, an official from the Pi Pin Yin IDP camp in Mrauk-U Township, said local authorities have not done anything for the camp since the arrival of the third wave of Covid-19 in May.

IDPs at the Pi Pin Yin IDP camp, which houses more than 2,700 people, are using only the remaining drugs and protective items leftover from the previous wave of the virus, U Kyaw Thein said, adding that the remaining masks, hand sanitiser and soap will last only about a week.

“The IDPs need some rice. Some IDPs are borrowing rice from displaced people with small family members. The IDPs are in urgent need of food supplies,” he added.

No relevant organisations or charities have provided protective equipment for the pandemic’s third wave in Arakan State, echoed U Sein Shwe Bu, an official from War Taung IDP camp in Kyauktaw Township.

“The IDPs are using only the remaining drugs and protective items left from the second wave of the virus and are urgently in need of medical items,” he said.

There are still more than 100,000 IDPs in Arakan State, and concerns about Covid-19 and its contagious nature are often heightened among these communities due to overcrowding in the camps.

As of July 27, a total of 2,419 cases and 126 deaths were reported in Arakan State during the coronavirus’s ongoing third wave, according to figures compiled by the state’s Department of Public Health.